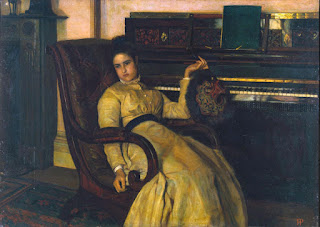 Review of "Consequences" by E.M. Delafield: It’s funny that I mentioned Anita Brookner in my review of Frances Hodgson Burnett’s “The Shuttle” because I have just read E.M. Delafield’s “Consequences” and I was often reminded of Brookner’s novels. Delafield was born nearly 40 years before Brookner, but her protagonist in “Consequences,” Alex, reminded me of a classic Brookner character who lives very much in her own head feeling tremendously misunderstood, and who is often squashed by outside forces. Delafield’s Alex wonders when she will start feeling “grown-up,” when life will begin, when she will feel part of things, when she will “arrive.” But like many of Brookner’s characters, she never reaches that future that she seems certain is out there waiting for her.
This book really puts the reader through an emotional wringer. I read nothing about the book beforehand except that it was reprinted by my favorite book people at Persephone Books, and I read only the barest facts about the author after I finished the book because I didn’t want to color my review with the impressions or analysis of others. But one thing I did learn was that “Consequences” was Delafield’s favorite of her own books. I wonder if that’s because it is so honest. I was reminded at times of Edith Wharton’s “The House of Mirth,” (which Wharton wrote about 14 years ahead of “Consequences”) when reading this book because the protagonist seems to be entirely unfit for her position in society, goes to extremes disappointing everyone around her in order to assert her personality, feels morbid about her choices afterward, and comes to a very sad end. And not a single person around her seems to make an effort to understand her at all.
As I began “Consequences,” I thought, this is going to go very badly for Alex. Maybe it was watching so much “Days of Our Lives” with Mawmaw Smith when I was a kid, but I can tell within the first two pages when things are going to go south. I almost chucked the idea of reading the novel, because I wasn’t sure I wanted to read something so tragic, but I decided to see what I could learn from Delafield.
At the end of the book, I asked myself why an author would put her reader through such an ordeal? You can ask this about a lot of books – Anna Karenina, for instance, which I loved. I regularly ask myself this when writing my own songs. Will there be any hope in this song or are we going to forge ahead and lay bare the cold hard facts? When I reflect on “Consequences,” I think the answer to why Delafield decided to put her reader through an ordeal and why she loved this book so much is because she had a deep empathy for young women brought up in the late Victorian era who had no hope of financial stability except making a brilliant match. The pressure to make this match in one or two “seasons” for an emotional, shy, fiercely loving, and very impractical girl was unbearable and, ultimately, fatal.
I felt very thankful to be a woman of the late 20th and early 21st centuries, after reading this book. Even though I love Jane Austen novels and a book that ends with a wedding, I am glad that I now have this other sort of story in my pocket about life in a highly tiered, socially stratified, corseted life.
If any other fans of Anita Brookner’s work, or readers of “The House of Mirth,” read this novel, I would be glad to know if you felt the resonance with “Consequences,” too.
A very sad, but revealing story about growing up in society at the end of the Victorian era. Recommended, but with a caution that if you love your protagonists, even if they are a bit unbearable, like I do, you’ll feel gutted – to use a British expression – by the end.
This book is available in Britain from the marvelous people at Persephone Books: http://www.persephonebooks.co.uk/consequences.html
You can also read it for free as an ebook thanks to the studious folks at Project Gutenberg: http://gutenberg.org/ebooks/34935.mobile
Or you can find a used copy to hold in your hands at abebooks.com
“Girl Resting at Piano” by Frank Huddlestone Potter can be found in the Tate Digital Library, Digital Copyright Tate London, 2014. http://www.tate.org.uk/art/artworks/potter-girl-resting-at-a-piano-n04617