The Girl I Once Knew 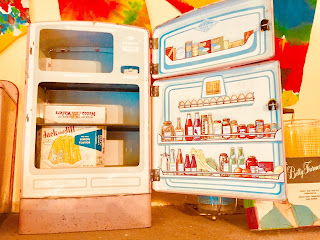 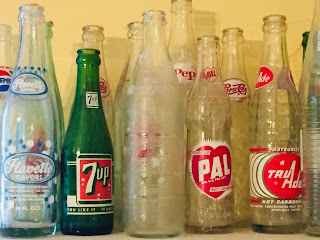 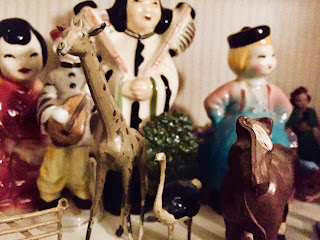 This week, I stepped into my house in Nashville for the first time in over a year. It was like stepping into an art installation made by someone I used to know – me, two or three years ago.
I came here to check on the house, to get a few sewing supplies and clothes to take back to England, and to do a little business in Nashville. But, instead, I am staring into a mirror at a person I might not have seen in a while. This person began collecting little treasures from the time she was a girl for “one day” when she would set up house. She has a set of pink tin children’s kitchen furniture, an array of china tea cups on her mantel, vintage cameras lined up like soldiers ready to shoot, and vintage soda pop bottles pulled out of old houses and flea markets keeping watch over the kitchen. She has a Hoosier cabinet, an Arts and Crafts desk, a pink ceramic water pitcher for her hairbrushes, and a pink melamine sugar bowl for her dental floss. She has a tiny green TV from Hershey Park and, when she looks in the peephole on the back and pushes the button on the bottom of it, she is transported to when she was ten years old, holding the hand of her grandmother and smelling chocolate.
I like this girl. I think we could be best friends.
This house was built in 1912 and has had only three owners, including me. The single sisters whose father built the house lived here until they died and hardly changed a thing as far as a can tell. The wood work has never been painted. The mantlepieces are in tact. The floors have never been stripped and “re-done.” The kitchen looks to have had an update in 1960. The almond appliances date from circa 1985. No dishwasher, just an electric range and boxy fridge. This house is the perfect setting for my teal plastic sugar and flour bins, for my tasseled lamp shades, for my super 8 film projectors. The house and my things are merry together.
I walked into this house with an aim to figure out which things I was going to take over to England at some point. But, honestly, the idea of dismantling this walk-in sculpture fills me with dread. My traveling companion once told me about an artist who took over an empty store front in London and made an art of dismantling and destroying all of his possessions. This is the image that buzzes through my mind as I look at my Elvis-whisky-decanter-music-box. I feel faintly sick.
My traveling companion says I should open my house to the public and charge admission. This idea, I like. Because, actually, not many people have been to the house or seen the installation. I remember when some friends visited from England a few years ago. They said they felt they’d walked into a home magazine, but a very quirky one that didn’t exist, and they started taking pictures.
Maybe, I’ll enter the Christmas home tour in 2018. Maybe, I will turn my house into a very quirky Air B&B or furnished rental. Maybe, I will wait and think about it all another time. I have learned in this last year of tumult, that the picture becomes clearer in time, and the path forward sometimes opens like a ten cent child’s fan with a picture of the thing that means the most in the world to you.
The house is rented until sometime next year. The ceramic elephants and bakelite napkin rings will stand sentinel until I return. And the girl I once knew? She’s still around, and, I must admit, she has a little collection of thirty pence, tiny ceramic ladies on my mantlepiece in London.