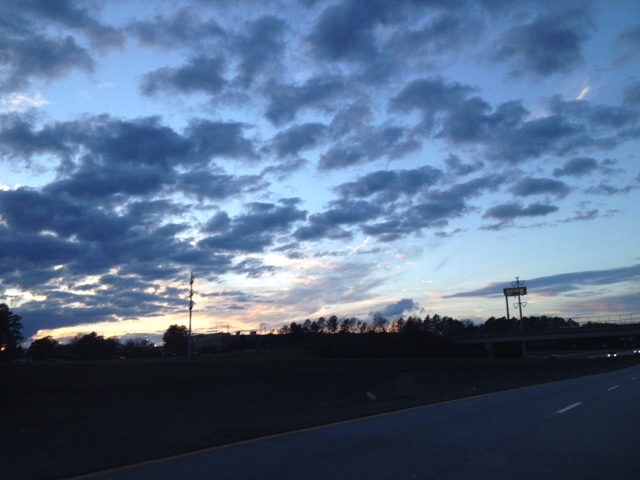 Gorgeous sky outside of Atlanta. Heading home to Nashville. Thanks, Florida friends! See you next year!
Posted by Jeni at 3:40 PM No comments: Links to this post

Review of The Shuttle by Frances Hodgson Burnett 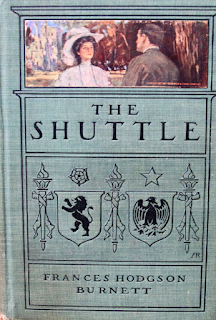 I particularly wanted to write a review of Frances Hodgson Burnett’s “The Shuttle” just to say to readers, please don’t be discouraged by the long shuttle metaphor that begins this book. The metaphor is a good and important one and recurs here and there within the novel. Naturally, I like the metaphor because it has to do with textiles. But I do think, to a reader anxious to get into the story, the length of the shuttle metaphor at the outset of this tale could give the impression that this book will be a slow one. I actually lost sleep at the end of this book because I had to read what happened next. So, it's definitely not slow. Like Jane Austen or Elizabeth Gaskell, Hodgson Burnett alternates fast paced, breathtaking scenes, with more contemplative exposition. She spends time drawing her characters and showing their effect on each other. The whole experience of reading this book, for me, was very absorbing, especially by the end.

As a person who spends a couple of months in Britain each year (pinch me), I found Hodgson Burnett's story about the early days of alliances between landed but cash poor British gentry and American heiresses very eye-opening. It's not a moment in the history of our American and British ties that I know much about. Viewers of Downton Abbey are sometimes reminded that Cora's fortune helped prop up Downton. In “The Shuttle,” Hodgson Burnett aims to examine the both the horrors and the happiness which can ensue as a result of such alliances.

After reading “Emily Fox-Seton or the Making of a Marchioness” and “The Shuttle” over the last week, I am thrilled to realize that the writer of two of my favorite childhood stories – “The Secret Garden” and “A Little Princess, Sara Crewe” –also wrote novels for adults. Very often great books are just lying in wait for us to discover or remember them!

“The Shuttle” was #4 on the bestseller list in 1907 and #5 in 1908, but it’s not a book that I’ve ever seen on a course syllabus which is surprising given how top notch it is. Like Dickens or Austen, Hodgson Burnett draws her characters starkly and there’s not a tremendous amount of subtlety in delineating the nice sorts of people from the deplorable, but I didn’t mind that. I think there will be books such as those by Anita Brookner that will be about people who are drawn in shades of grey, but there will also be books where the characters move about to create a compelling story. I enjoy both kinds of books. “The Shuttle” is one of the second kind of books.

I think this story would make a wonderful film or mini-series. I would love to see Ang Lee make this book into a movie because he made such a beauty of a film with “Sense and Sensibility.” And Emma Thompson would write a superb screenplay, I’m sure. Less subtle directors would be sure to focus mainly on the lurid and sinister parts and little of the brilliance and brightness in the book. And there is quite a lot of brightness in this book despite one very dastardly character who makes the pain of others his joy. He is probably more villainous than any character in an Austen book, and equal to some of Dickens’ blackguards. If you’ve read George Eliot’s “Daniel Deronda,” you will be somewhat reminded of the cruelty of Henleigh Grandcourt when reading this book.

I learned of “The Shuttle” through the excellent London bookshop Persephone Books whose mission is to bring forgotten and neglected, but worthy books, back into the public eye. Since ordering a physical book from them from abroad is a special treat for special occasions, I was delighted to find that they have an ebook page and that “The Shuttle” is one of the titles that they carry, which is also on project Gutenberg. So, if you are in Britain, I highly recommend you buy a gorgeous physical copy from Persephone with their signature dove grey cover and endpapers from a 1903 Turnbull and Stockdale design. If you are “up against it,” as the terrific character of the American typewriter salesman, G. Selden, says in “The Shuttle,” then head over to project Gutenberg and get this on your Kindle or eReader.

Posted by Jeni at 11:00 AM No comments: Links to this post

Email ThisBlogThis!Share to TwitterShare to FacebookShare to Pinterest
Labels: Book, review, the shuttle 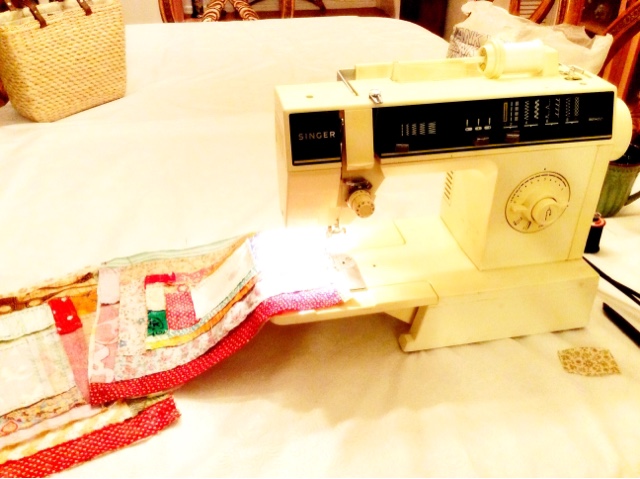 Finishing up some pillows thanks to Harriet & Bruce and their Singer 6215c - an oldie, but a goody. I really love sewing on different machines around the globe. I found the manual online and it was off to pillow happiness!
Posted by Jeni at 2:23 PM No comments: Links to this post 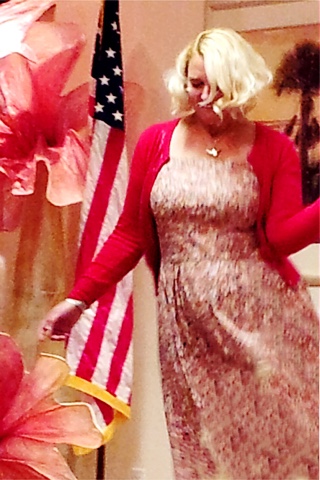 I obviously find my job very tedious and, evidently, I'm a highly serious person.
Fan photo I just got in my email from our Wednesday concert in Naples.
Posted by Jeni at 6:55 AM No comments: Links to this post 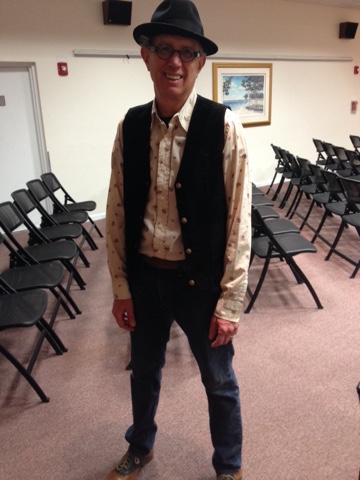 This guy! My true love before the show, yesterday.
Posted by Jeni at 1:44 PM No comments: Links to this post 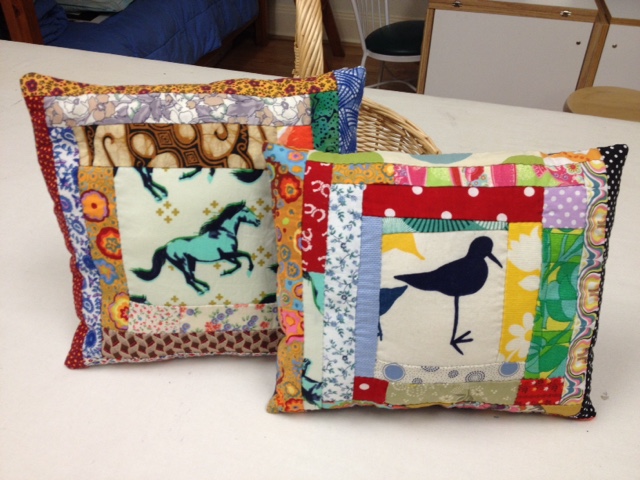 Been enjoying the chance to rehearse and finish up two more pillows today. The folks who are hosting us have a giant sewing room and I've had a great day using a Bernina that purrs and borrowing a sturdy thimble!
Posted by Jeni at 5:52 PM No comments: Links to this post 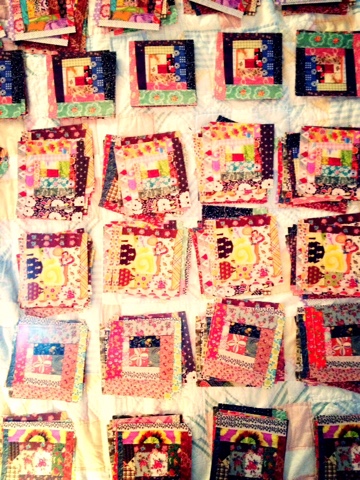 New square quilt postcards for the new year!! Yummmmmmm! I am so thrilled with how they came out. And here they are, just in time for the show tonight! I got these printed at our favorite local print shop in Seven Lakes, North Carolina -- Harris Printing. They just jump off the cards and the reproduction of the fabric looks so lush and rich. 14 cards - two of each design - for $10. $12 with shipping in the USA. If you'd like some before we make it to your part of the world, you can send a paypal or check. Just message me! International shipping, I will have to check, but I'll be bringing them to Britain and Canada this year.
Posted by Jeni at 12:55 PM No comments: Links to this post

You said you'd cut our hearts out with a spoon, and, today, you did. Goodbye, Alan Rickman. I saw you twice in real life in NYC, just being a regular ole citizen of the planet. You were in the lobby at a performance of the Blue Man Group and then, again, at a performance of Japanese Noh at BAM. I've always thought it curious that in the plays we saw in common, the players were covered in paint - blue and then white. I'm not sure what that signifies, but both times I felt giddy. I hope you're taking in a show of painted players right now, perhaps the color of starlight.
Posted by Jeni at 6:34 PM No comments: Links to this post 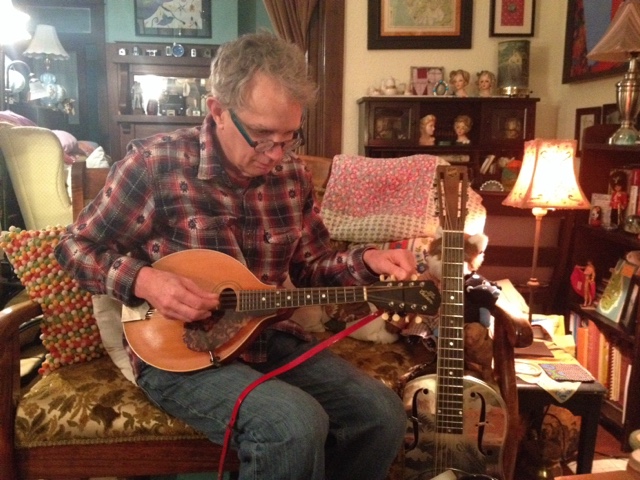 Packing, haircut, rehearsal!
Posted by Jeni at 5:11 PM No comments: Links to this post 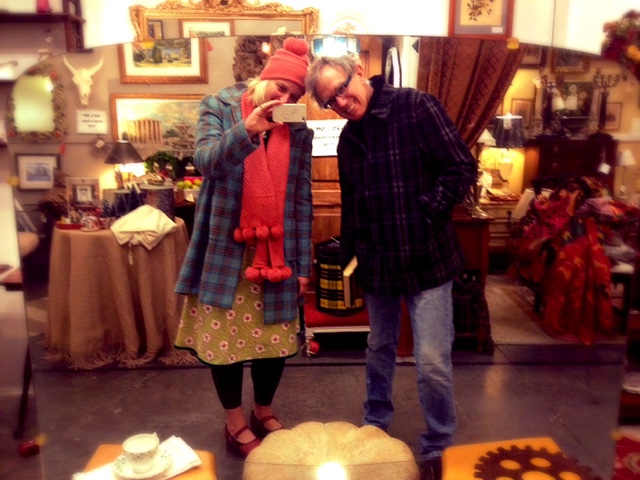 Got out of the house for a few hours on Sunday to go ambling around the Museum of American Cultural Artifacts, also known as the Antique Mall. Billy got a book for $2 and I had a chance to take the skirt I made on a little outing. Just two more days of rehearsal and packing up and off we go to Florida!
Posted by Jeni at 11:01 AM No comments: Links to this post 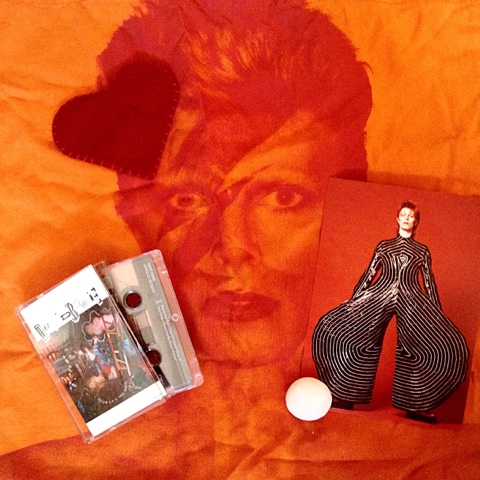 When I was a kid, I spent a lot of time staring at the cover of Aladdin Sane. I loved looking at these time capsules left behind by the world my parents called "before you were born." The time I spent with David Bowie was time very well spent. My "Never Let Me Down" tape won't play anymore which is evidence of a friendship well worn.
My poetry mentor always said let other artists be your teachers. David Bowie showed up to school in a plastic suit and platform shoes. Thank you for staring back at me, Ziggy Stardust, for scaring the bejeesus out of me as Jareth in Labyrinth, for letting me back you up in my pajamas with my hairbrush microphone on "Day-In, Day-Out," and for being one of those supreme teachers of theatrical musical arts and glitter.
Posted by Jeni at 7:42 AM No comments: Links to this post

Pretty Girls in a Line 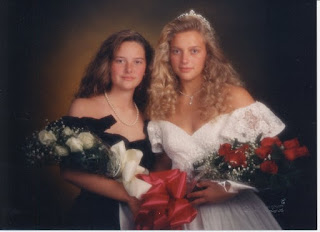 Remember that photo of me as a rooster and my sister as an elf that I posted on Wednesday? Here's the song I mentioned that Billy and I wrote way back in 2005 for my sister. It's called "Pretty Girls in a Line." Enjoy!
https://www.patreon.com/posts/pretty-girls-in-3928681
Posted by Jeni at 11:08 AM No comments: Links to this post

Back at the GarageMahal 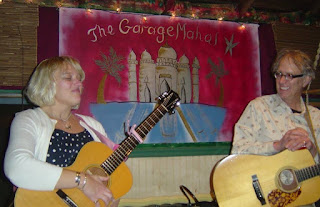 It's very nice to be called a "hoot" when you are a storyteller! So, I consider the review below this concert blast to be one of the best I've received, and my expression in this photo only confirms it. Billy is very patient :)
Jeanne Holton Carufel, WMNF's Acoustic Peace Club and Jim Strickland, "Mr. Ethnic" present:
Jeni & Billy in Concert
Their 3rd appearance at the GarageMahal in San Antonio, FL.
Saturday, January 16th, 2016
Doors open at 7 PM, concert starts at 7:30 PM
Suggested donation $15 (or more) with all proceeds to the artists.
Norm will make his famous coffee.
Feel free to bring some goodies to share for the snack table.
For more info, message Jim on Facebook or write him at mrethnic1@gmail.com
Jim says: As most everyone knows, I'm a big Jeni & Billy fan, great musicians, plus Jeni is a hoot and a wonderful storyteller.
Please join us for a truly magical evening at GarageMahal !

Posted by Jeni at 8:50 AM No comments: Links to this post 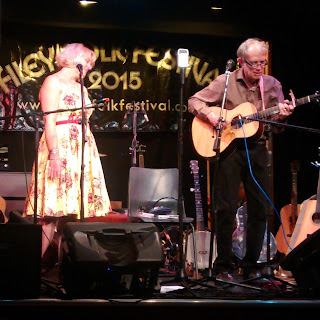 Thrilled to say that we've booked our plane tickets for our 2016 Toast and Tea tour of Britain and we will be giving concerts in England, Wales, AND Scotland this year! 25 shows on the books as of right now and several more in the works! We arrive on May 11th and depart on July 7th! Can't wait to see all of our friends! This time around, we'll be playing MerleFest​ the same weekend as the 2016 Filey Festival where this photo was taken, but there are rumors we will be there for Filey Folk Fest in 2017! Bring on summer!

Posted by Jeni at 1:05 PM No comments: Links to this post 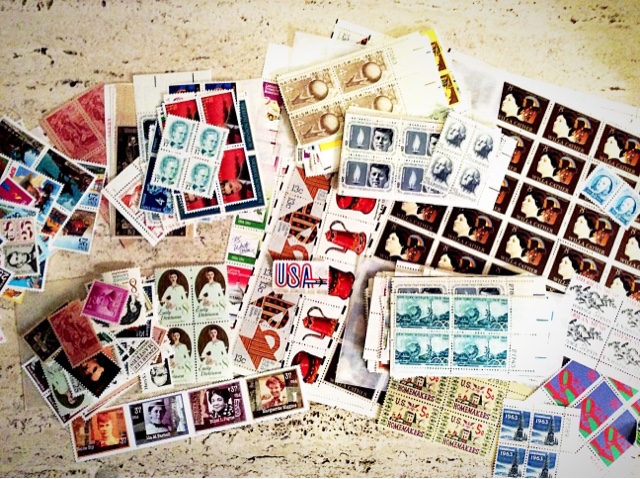 Just so you know that I wasn't kidding about how much I love stamps - my Christmas present from Billy and why I was so frantic to track down our lost mail.
Posted by Jeni at 8:10 PM No comments: Links to this post

Scraps of the old days 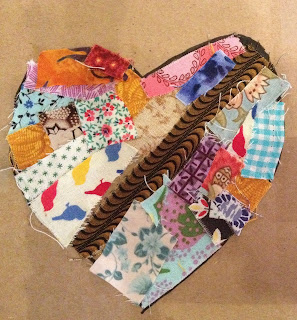 We wish you a beautiful first weekend of the new year! May the scraps of the old find purpose in the new. Here we go!

Posted by Jeni at 8:24 AM No comments: Links to this post