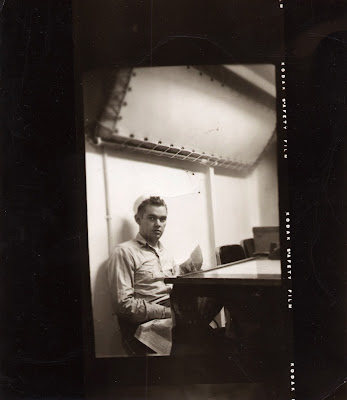 Report from Burbank, California: Grandaddy would only listen to Roger Miller or Willie Nelson. For him, you could find all you needed in Roger and Willie and all other music was superfluous. I distinctly remember a Thanksgiving shortly before he crossed over when he held my hand as we stood in the doorway of Mom and Dad's kitchen and he sang "England swings like a pendulum do, Bobbies on bicycles, two by two, Westminster Abbey, the tower of Big Ben, the rosy red cheeks of the little children."

He could remember Roger Miller, but I wasn't sure if he remembered me because he had Alzheimer's by then. It didn't matter in the grand scheme of things, though, because I was happy to be standing with my grandfather, hand in hand, listening to him sing through his big Hankins gap-toothed smile.

He was in the Navy and didn't like it much, but he served his time when called. He spent the whole time in dry dock in Norfolk, Virginia, chipping paint and editing the ship's newspaper. He got out and became a newspaper man after having having made his start as a kid sweeping the floors of the Richlands News Progress when his own Dad died of black lung at the age of thirty-three.

I didn't know him so well growing up, since he and my grandmother divorced when my Dad was a kid. But our paths crossed now and again in my childhood and then more so when I got to college. I lived with him for a summer while I was in college. He let me work at his newspaper in Troy, North Carolina, where I did weddings and obituaries, and manned the front desk and the main telephone line. He assigned me two feature stories and one got picked up by the Catholic Reporter. He ate a pack of nabs (peanut butter on cheese crackers) and drank a coke for lunch each day. I rode with him to and from work and the tenor of his conversation was about how I needed to get a job after graduation and think big. And he continued in this vein all through our steamed vegetable dinners at night.

I think his itchy feet must have been passed on to this hobo girl who does her own kind of reporting in songs and stories. I began these tour reports on a whim, but as the weeks have worn on, I have felt a true resonance with Grandaddy and my own father and mother who publish a local newspaper in North Carolina. It's good to be in the family business.

Thanks, R. Guy, for the gap in my teeth that followed me through school pictures, for the solar calculator I still have in my desk drawer, for the way I squint my right eye in photos, for the white teddy bear I named Poltergeist, for always carrying tic-tacs, for your big barrel laugh, and for being our very own Grandaddy Long Legs.

"The river flows on like a breath
In between our life and death.
Tell me who's the next to cross the borderline."
– Ry Cooder, Jim Dickinson, John Hiatt (as sung by Willie Nelson)